Welcome to today's dev-log. Many of you noticed that we are in August and the network is still not open....

We were originally planning on releasing it 2 weeks ago, but our two test sessions brought up very bad news for us.

One of the technical choices of our game framework was a bottle neck. The choices we made to decrease the over-all development time hurt us a lot in terms of performance. The entirety of our game system had to be recoded. This meant, recoding all our games and the system running the games. It took quite a bit of time, around 150 hours in 11-12 days...

We even changed our event registry. The system handling all our game events to make our games run even faster. It was previously made like the Spigot event system which turned out to be quite inefficient with a great amount of events.

We also had to change our chunk rendering system. During our test sessions, one player couldn't see any chunks and sometimes players were seing entities disappear at certain chunk borders.

Our chunk rendering system is custom made and allows you to enjoy the network with a render distance up to 32 chunks in our big games. This was also something we had to fix before the release.

Overall, we increased our performance by a factor of 100 on our event registry and a factor of at least 10 in general. All our game servers boot up in a matter of several seconds, and we can support hundreds of players per instance on our big-games. This was a painful but necessary process for you to be able to fully enjoy our work.

Now that the reason behind us not releasing the network has been cleared out, let me give you the good news.
There is going to be a new test session for everyone to join and it will happen in a few hours. This test session will last around 2 hours and your progress will not be kept when we release.

The network will be released very soon, and we will announce the release just a few hours before it happens...

As mentioned in a previous blog post, this will be a soft release and communication about our network will be done after the release. We will have weekly updates fixing issues you may encounter and releasing new game elements each week.

The test session will be announced on our Discord, so turn on your notifications for the #announcements channel!

Final rankings are in!This update post was previously posted on GamesLabs.net. Hello everyone. This will most likely be the final post before the release (exciting right?). I promised you guys a list the top 100 best performing players on the minescape classic game. The following list contains the ranking, the username and the amount of orbs for the 100 best performing players according to our calculation. # USERNAME ORBS 1 Gentleman_Azir 63950 2 Rexx220 41700 3 Lasuuri 37550 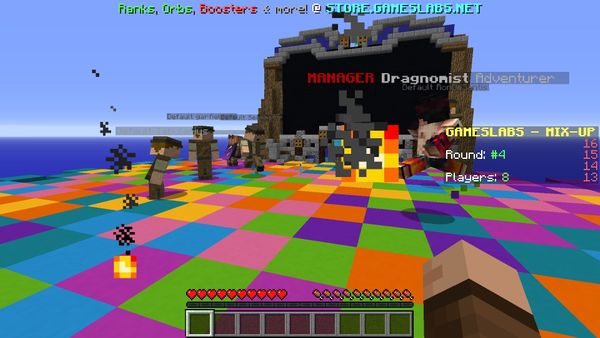 This update post was previously posted on GamesLabs.net. Hello everyone and welcome to the third installment in the Dev-Log series. Our last message told you about the ability to sign up for a test session. We held two test session with you since then and this Dev-Log is here to tell you about our findings. We will also address the question about how your account from the previous version will be transferred into orbs on the new network, since